The next Verbose will be a Confingo takeover, with readings from Nicholas Royle, Tom Jenks and others. Confingo is a biannual literary magazine published by Tim Shearer. Copies will be available to purchase.If you’re interested in having an open mic slot, email verbosemanchester@gmail.com

Hailed by the media as one of the best spoken word nights in Manchester, Verbose’s headliners are always linked – this time we’re celebrating the annual National Flash-Fiction Day by welcoming leading proponents of the short-short story to the stage at Fallow Café in Fallowfield, Manchester, on Monday 26 June.

Compère Sarah-Clare, herself a champion of the form, will also read. Of stepping down from organising and hosting the event, which she has done since January 2015, she says: “I’ve loved every minute of running the night and have met some amazing people by doing so, but it felt the right time to hang up my Verbose boots.”

The three headliners this month are: Benjamin Judge, one of the founding members of the Flashtag writing collective; Tania Hershman, whose third collection, Some Of Us Glow More Than Others, came out last month, and Neil Campbell, who will be reading from his new collection of stories of fewer than 1,000 words, Fog Lane.

Since its relaunch in January 2015, Verbose has welcomed many luminaries of the literature scene, including poets Richard Barrett, Anne Caldwell, Michael Conley and Rosie Garland, and prose writers Jenn Ashworth, Stephen May, Nicholas Royle and Emma Jane Unsworth. Man Booker Prize-listed authors Ian McGuire and Alison Moore have been guests, and narrative non-fiction has also found its place. February marked the launch of David Gaffney’s new novel All The Places I’ve Ever Lived, with March welcoming Beth Underdown to read from her critically acclaimed book The Witchfinders’ Sister, and May hearing from Sarah Tierney’s debut, Making Space.

Taking place at Fallow Café (2a Landcross Road, M14 6NA), entry is free and doors are at 7.30pm. See verbosemcr.wordpress.com. Verbose also includes an open mic line-up – potential performers should email via verbosemcr@gmail.com for a slot

Following standing-room-only events in February and March, live literature night Verbose is back on Monday 24 April, at Fallow Café in Fallowfield, Manchester.

Hailed by the media as one of the best spoken word nights in Manchester, Verbose’s headliners are always linked – this time it’s members of The Writing Squad initiative.

James Giddings received a Northern Writers award in 2015. His debut pamphlet Everything is Scripted won Templar Poetry’s Book and Pamphlet Award in 2016, and he’s shortlisted for the upcoming Saboteur Awards. Charlotte Wetton won second prize at the StAnza Slam and her pamphlet I Refuse to Turn into a Hatstand is just out with Calder Valley Poetry. James Varney is a writer and theatre maker who has had work published in Ambit, and Gregory Kearns is a poet based Liverpool, published by In The Red 14 and The Lifejacket Anthology. 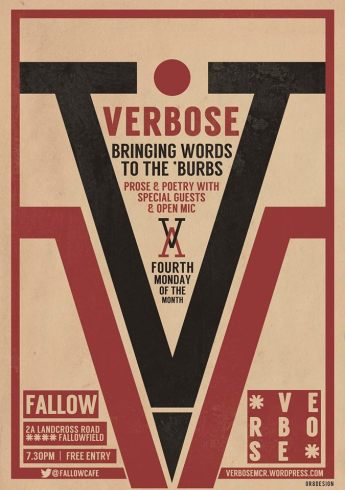 Following a standing-room-only event in February, live literature night Verbose is back a week today, on Monday 27 March, at Fallow Café in Fallowfield, Manchester.

Hailed by the media as one of the best spoken word nights in Manchester, Verbose each month invites three headliners who share a link, be that a publisher or publication, a writing group or project, or a common writing-related place of work. This month, Verbose showcases three authors who are associated with the Centre for New Writing at the University of Manchester: Grace McCleen, Susan Barker and Beth Underdown.

Betty Trask Award-winner Grace McCleen is a writing fellow at the Centre for New Writing, author of three novels and former writer in residence at the Bronte Parsonage in Haworth. Jerwood Prize-winner Susan Barker teaches creative writing and is working on her fourth novel. Beth Underdown has just launched her debut, The Witchfinders’ Sister, to critical acclaim. She is a Lecturer in Creative Writing at the Centre for New Writing, which is headed up by renowned author of Oranges Are Not The Only Fruit, Jeanette Winterson.

This month’s headliners have all been published by literary periodical Bare Fiction Magazine, which promotes new creative writing across poetry, fiction and plays, and includes articles, reviews and interviews with practitioners. Michael Conley has published two pamphlets, Aquarium (Flarestack Poets) and More Weight (Eyewear). He runs a literature night The Other, in which poets swap words. Rosie Garland has five collections of poetry, with a sixth out this year on Flapjack Press, and two novels. Her third novel, The Night Brother, is due out next spring. Rachel Mann is resident poet at Manchester Cathedral. She is the author of three books, with The Great War, Memory & Symbol being published in spring 2017.

Fancy a go on the open mic? Sign up for a three-minute slot by emailing verbosemcr at gmail dot com.

Live literature night Verbose is back on Monday 23 May, with special guests from the fabulous Knives Forks and Spoons press and the usual open mic of prose and poetry performances – sign up for a three-minute slot by emailing verbosemcr at gmail dot com.

Run by Alec Newman, Knives Forks and Spoons has developed the biggest avant garde poetry list in the UK since its launch in 2010, publishing seminal international figures in experimental poetry together with many young poets and “outsider” practitioners. May’s Verbose welcomes Tim Allen, Neil Campbell and Rhys Trimble.

Tim Allen edited the magazine Terrible Work and is involved with the Peter Barlow’s Cigarette live literature events in Manchester. He has a …number of poetry pamphlets to his name. Neil Campbell has been included three times in the brilliant Best British Short Stories series. He has three collections of short fiction, two poetry chapbooks and his first novel, Sky Hooks, is out in September. Rhys Trimble is a poet and shoutyman from Wales who enjoys poetry across languages. He has performed extensively across UK and Europe.

Verbose is hosted by Sarah-Clare Conlon at Fallow café, 2a Landcross Road, Fallowfield, M14 6NA. It’s free entry and doors are at 7.30pm. Verbose takes place every fourth Monday of the month.

Verbose is a monthly spoken word night at Fallow Cafe, 2A Landcross Road, Manchester, M14 6NA, showcasing the best poetry and prose the Rainy City has to offer. Each month sees special performances by featured guests from various writing collectives and independent publishers, along with an open mic, when anyone can get up and read their work. The first event of 2016 is on Monday 25 January, with special guests and an open mic. Free entry, doors at 7.30pm.

The headliners are from the Edge Hill Writers’ Group: Ailsa Cox, Jim Hinks and John D Rutter. Their colleague Billy Cowan will be reading on the open mic. As a special post-Xmas gift, the gang will also be giving away copies of their Cheltenham Literature Festival anthology, which features best-selling novelist Carys Bray – first come, first served! More at the Verbose site.

Only one year on and it’s happening again, this time on home turf in Fallowfield, Manchester, at Verbose:

Live literature night Verbose is back on Monday 22 June. This month, our special guests are James Davies, Tom Jenks and Scott Thurston, the three organisers of long-running, Manchester-based experimental poetry reading series The Other Room. No slouches on the publishing front, with over 20 books between them, James, Tom and Scott also collaborate extensively with other writers and run various other enterprises: if p then q independent publishing house (James), zimZalla avant objects (Tom) and Journal of British and Irish Innovative Poetry (Scott).There will also be an open mic of prose and poetry – visit the Verbose website for instructions on how to sign up. Your host is Sarah-Clare Conlon. It’s free entry and doors are at 7.30pm – get there then to bagsie a seat. Verbose takes place every fourth Monday of the month at Fallow café, 2a Landcross Road, Fallowfield, M14 6NA. See http://verbosemcr.wordpress.com/ for more details.