Riccardo Boglione, It is Foul Weather in Us All

Riccardo Boglione sent copies of Shakespeare’s The Tempest to twelve artists living in Europe and America, each copy in the language of the country of residence of the artists, asking them to leave the book outside to the weather for as long as they wanted. The pages from those mistreated volumes reconstruct a Frankensteinian version of the play. In an extension of the metaphor of the tempest, the author gathers a small collection of injured volumes, mimicking Prospero’s book. Simultaneously he produces a version of Shakespeare’s play that shakes notions of authority (who is the real author? The invited artists? The English Bard? Boglione? The translators? Bad weather? Time?) and aesthetics (the ‘work’ of rain, snow, wind, and sun transformed the text’s characteristics, giving it a sculptural dimension that obfuscates its literary one). At stake once again, the perpetual dualisms: objects and words, nature and culture, Old and New World.

Field Poetics explores five different places, each with a story to tell, each with a unique mode, form, and vocal register through which to tell it. The writing journeys through a sequence of Andrei Tarkovsky’s ‘film images’, the multi-dimensional, interconnected space machine of the Bonaventure Hotel in Los Angeles, maritime pockets on the edge of the city of Lisbon, a history of silence and surveillance in a derelict wing of the Cork City Gaol, and the transposition of a centuries-old landscape aesthetic through video, performance, and pop in fourteen locations across the Kansai region of Japan. Sometimes documentation, sometimes score, and sometimes the work of a poet and an architect engaging with these sites, Field Poetics spins, suspends, and extends a relation to place.

In THE GOOD READER series:

Why in our globalised twenty-first century the idea of a world capital city is passé. This essay examines the hypotheses promoted by Walter Benjamin’s Arcades Project and Kenneth Goldsmith’s response Capital: New York, capital of the 20th century, that Paris was the unofficial world capital city of the twentieth century—a mantle inherited by New York—and declares the model unfit for purpose in the twenty-first. Despite an apparent recrudescence of the nation state, the capital city as power base looks increasingly like a tribal relic, as digital technology rewires humans and our shared fate is thrown into stark relief by one ecological disaster after another. With the inexorable spread of the urban, pockets of sustainable business practice and hipster lifestyles suggest global capitalism is mutating from the inside, lured by the promise of an acephalic future.

The Desire for Haiku

For two years we have been reading The Preparation of the Novel by Roland Barthes, the collection of the series of lectures he gave at the Collège de France between 1978 and 1980, completed shortly before his death in 1981. He declared his intention to write a novel, and in this pedagogical experiment, explores the trial of novel writing. This year we are reading his lectures on his favourite literary form, the haiku, a poem of seventeen syllables in three lines of five, seven, five, usually containing a seasonal reference.  He confronts the problem of how to pass from Notation (of the Present), ‘a short fragmented form’, to the Novel, ‘a long continuous form’. For Barthes, the haiku is an ‘exemplary form of the Notation of the Present’, ‘a minimal act of enunciation’ that ‘notes […] a tiny element of “real”, present, concomitant life’.Our haikus are Barthes’s haikus, or rather, our haikus are constructed only of his words, extracted from the chapter entitled ‘The Desire for Haiku’, one from (or even for) each page. It is an experiment in writing, if not a search for a form (for thatis given), drawn from our more or less monthly meetings during the academic year around a table to talk about writing, the trial of writing, one that may show the rhythm of our reading.

The above is from a series collecting and reframing found images that casts a rather unsavoury, even sinister gaze on a representation of childhood.

MA BIBLIOTHÈQUE will be at 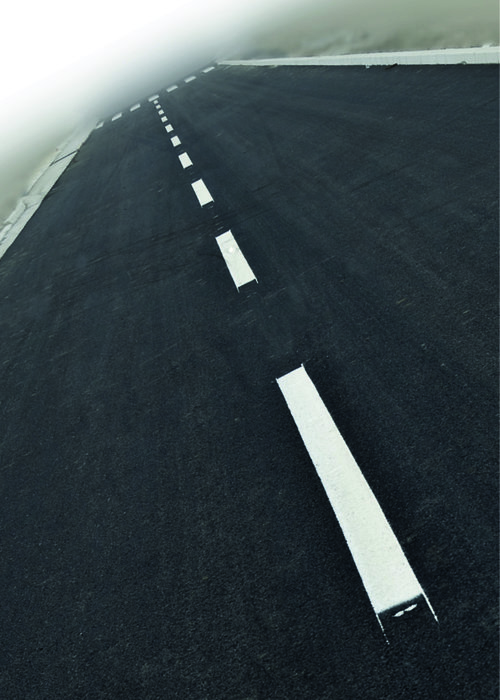 Sean Ashton, Living in a Land
––Living in a Land is a novel written almost entirely in the negative, consisting mainly of things the narrator has never done, no longer does or will never do. Given that what he has not done is more diverse than what he has, there is much ground to cover, and he approaches the task with arguably greater zeal than a conventional diarist. A study of the conceivable versus the actual, the personal versus the universal, idiocy versus logic, black versus white, circles versus squares, renting versus buying, Living in a Land is a chronicle of a mind fighting its own oppositional nature, a portrait of a hypothetical man.

Buster V. Dachy, The Crumpled Envelope
––Buster V. Dachy pays homage to Poe, Gombrowicz, Godard, and Lacan’s destined ‘purloined letter’. This unusual novel follows the structure of a play, with acts and scenes, but it entertains a rather ambiguous relation to narrative. Although there is one (a detective story even), with beginning and end, it appears to be distributed between a number of characters and voices, which are not always clearly distinct. Yet, the characters are assigned in the ordinary way of a play: they have names, roles, titles, and functions. Undoubtedly the main male character is rather sophisticatedly grotesque and the lead female character rather elegantly contrived. Visitors sound like shadows, which leaves the stage to four museum guardians who are the true heroes of this melancholic comedy. It finishes as it started, with a categorical sense of insignificant necessity.

Sarah Wood, Civilisation & Its Malcontents
––Caught up in the vortex of this bellicose age, adrift on the sea of digital information and misinformation, without perspective enough to glimpse the future that is actually forming, I am finding it hard to think.

Here is a book about thought right now and about how to think in a world that asks us at every level not to. Discontent? Malcontent? Sarah Wood looks at the world through Freud and fraud.

Claire Potter, Round that way
––But the air lays thin and low in the towns around here. Precipitation from the hills causes the pressure to drop off, it puts distance between the air’s molecules, bringing on headaches and low spots where storms kick up.

Round that way is Claire Potter’s second published book. It brings together CHAVSCUMBOSS, a poetic experiment in writing while watching the performance of masculinity by the YouTube user of the same name—and a short story, PRESSURE, in which a house fire raises painful heat in the residents of a small northern town.

Sharon Kivland, Freud’s Views, Freud on Holiday Appendix V
––Almost every year Sigmund Freud went on holiday, often accompanied by his brother Alexander, an expert on railway transport, timetables, and travel tariffs. Freud made a distinction between the holidays he spent with his family during the month of August, usually in the Alps, and those voyages he took later, most often in September, with complicated itineraries. The fifty-six letters and hundred and eighty-nine postcards of his travel correspondence with his family and reveal his enjoyment of these holidays. Herein Freud’s views, as both prospects and opinions.