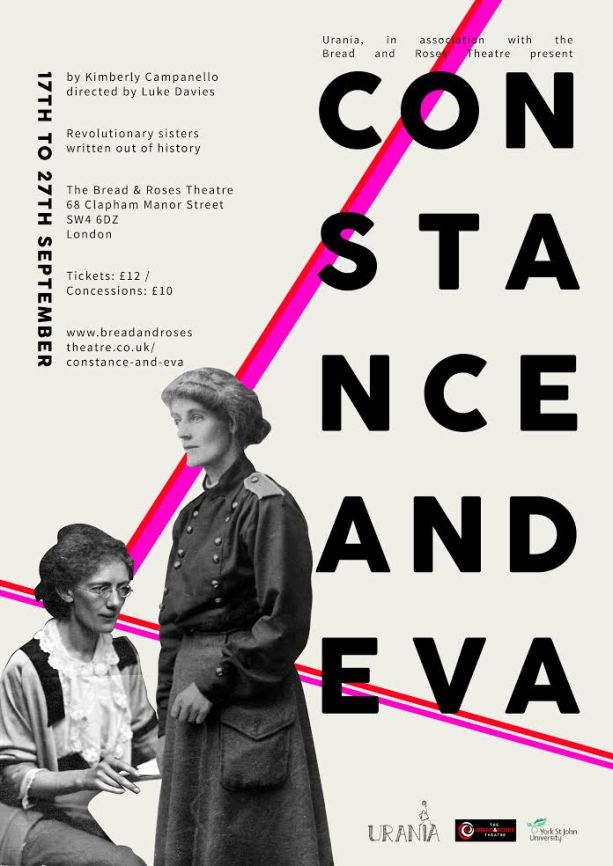 at The Bread & Roses Theatre in Clapham

A new play by Kimberly Campanello about two sisters who abandoned their privileged upbringing in Ireland to become political radicals. Constance Markievicz and Eva Gore-Booth battled imperialism, fought for women’s rights, and sought to redefine gender and sexuality. They were famous – even infamous – during their lifetimes, but history has largely forgotten them. More details here.

Recording from July 2016, Other Room

Iain has a frequently collaborative practice as a writer and performer, working within live literature and live art contexts. Projects have included sung staging of texts by women Beat Generation writers, a lecture presentation and performance with classical musicians for New Media Scotland’s Syndicate series, and Subject Index a durational installation of the complete poems of Emily Dickinson developed in residency at Forest Centre+ and toured to Berlin’s SOUNDOUT! New Ways of Presenting Literature Festival in May 2014. Publishing includes poem-responses to fin de siècle Vienna included in the Kakania anthology (2015), published by Austrian Cultural Forum London and edited by S.J. Fowler and work in serial publications such as HOAX, Soanyway and Scree Magazine. In his role as Enterprise Manager at The Fruitmarket Gallery, he works within a commercial framework to grow new audiences and bring them into dialogue with the Gallery’s exhibitions programme through events and other activity.

Sarah-Clare Conlon’s prize-winning work is published by Salt, Comma, Stand andFlash, who called her “one of the most interesting and inspiring authors writing flashes today”. She was long listed for the Bath Flash Fiction Award. A former journalist on ELLE, with a Creative Writing MA, she edited The Manchester Anthology, writes for The Manchester Review, The Skinny, Creative Tourist andConfingo, and runs popular Manchester live literature night Verbose.

Our next event takes place on 20th July with Kimberly Campanello, Sarah-Clare Conlon, Geraldine Monk and Iain Morrison. Start time is 7pm at The Wonder Inn and as always is free entry. We hope to see you there. More on the events page.

Geraldine Monk was born in Blackburn, Lancashire in 1952. Since first being published in the 1970s she has written eight major collections of poetry and numerous chapbooks. Her writing has appeared extensively in the both the UK and the USA. As an extension to her activities in poetry she collaborates with many musicians including Martin Archer, Charlie Collins and Julie Tippetts. A collection of essays on her poetry, The Salt Companion to Geraldine Monk, edited by Scott Thurston, was published in 2007 by Salt Publishing. They Who Saw The Deep is her new book and will have its northern launch at the event.

Pamphlet launch: Lindsey Holland ‘The Lanterns’ with fellow Eyewear Aviator poets Paul Deaton, Ken Evans and Kimberly Campanello. Our compere for the evening is Andrew Forster. Entry on the door or online (details soon), £4, with a free glass of wine or soft drink.

LINDSEY HOLLAND was shortlisted for the 2015 Manchester Poetry Prize with a portfolio of poems from this pamphlet. She is co-editor of the online poetry magazine The Compass. Her poetry sequence Particle Soup appeared with KFS in 2012. She is a Hawthornden Fellow, founder of North West Poets, and literature professional. Her MA in Writing is from the University of Warwick and she lectures in poetry at Edge Hill University. The Lanterns is part of a larger project drawing on her family history.

Lindsey will read from ‘The Lanterns’, published by Eyewear as part of their 2016 Aviator Series. The launch will also feature readings from fellow Eyewear Aviator 2016 poets Paul Deaton, Ken Evans and Kimberly Campanello.

The Lanterns tells the story of John Jones, a nineteenth century mariner. These are poems of seafaring, desire and the conflicts between them. As Jones’s great-great-granddaughter, the poet resurrects him, blending the known facts of his life with richly imagined likelihoods in contemporary poems which explore universal themes. Jones’s voice is an insistent one, describing voyages through love and loss, nature and industry, the lived eternity of ocean and the ghosts of life at home with the woman he loves.

PAUL DEATON was runner-up in the 2010 Arvon International Poetry Competition. Poems regularly appear in The Spectator,
and in magazines: PN Review, The London Magazine, The Dark Horse Magazine, Gutter Magazine and anthologies: The Cockermouth Poets (2012), the The Echoing Gallery (ed. Rachael Boast, Redcliffe Poetry, 2013) and Ice (edited Meredith Collins, Pighog Press, 2012) as well on BBC Radio. He has almost completed his novel What I Wouldn’t Say: the first chapter was published by Freight in Tip Tap Flat. He has MLiTT in creative writing from Glasgow University.

KIMBERLY CAMPANELLO’s previous poetry publications include the pamphlet Spinning Cities (Wurm Press), her debut collection Consent (Doire Press) and the limited edition book Imagines (New Dublin Press). In 2015, The Dreadful Press published Strange Country, her collection on the sheela-na-gigs. MOTHERBABYHOME, a book of conceptual and visual poetry on the St Mary’s Mother and Baby Home in Tuam, Co. Galway, will appear with zimZalla Avant Objects in September 2016. She is a Lecturer in Creative Writing at York St John University.

KEN EVANS poems have featured in Envoi, The Interpeter’s House, The Glasgow Review of Books, and The Morning Star, as well as on the ‘And Other Poems’ and ‘Clear Poetry’ websites. He’s been highly-commended in the Bridport and shortlisted in the Troubadour Competition. This is his debut pamphlet and features work from The Poetry School’s ‘Primers’/Nine Arches Press shortlisted first collection (2015), which was noted similarly, in Bare Fiction’s debutante competition the same year. His poetry MA is from Manchester University.

Future Other Room reader Kimberly Campanello has a new book out with Eyewear. She also has a limited number of signed copies available for £5. If you’d like one of those, you can find her contact details here.

Kimberly Campanello’s new collection is an exciting new work, that through the theme of the mythical Sheela na gig, explores the light and dark of Modern Ireland. Out now on The Penny Dreadful.