Come and celebrate the London launch of 5 brand new titles from Boiler House Press. A post-launch DJ set is rumoured!

Colin Herd is a poet, fiction writer and critic based in Edinburgh. His first collection of poems too ok was published by BlazeVOX in 2011 and a second full-length collection Glovebox was published by Knives Forks and Spoons Press in 2013. Colin’s work has been anthologised in the Forward Book of Poetry 2015 and Dear World and Everyone in It (Bloodaxe, 2013).

Currently based in Edinburgh, Iain Morrison  has a frequently collaborative practice as a writer, working in poetry and live literature. Projects have included Subject Index a durational installation of the complete poems of Emily Dickinson developed in residency at Forest Centre+ and toured to Berlin’s SOUNDOUT! New Ways of Presenting Literature Festival in 2014, and a night of drag queen poetry at Scottish Poetry Library in 2016 which bagged him a Creative Edinburgh award. Publishing includes MARQUE, a pamphlet with If A Leaf Falls Press (2017), and poems in anthologies and magazines including Kakania (Austrian Cultural Forum 2015), HOAX and Gutter. A first collection comes out with Vagabond Voices later this year.

Vicky Sparrow is completing a PhD on the poet-activist Anna Mendelssohn at Birkbeck,  ersity of London. Her writing can be found in datableed, Kakania, Litmus and the Literateur and she serves as reviews editor for the Journal of British and Irish Innovative Poetry. Her first pamphlet Notes to Selves is published by Zarf.

Admission for this event is £3 and refreshments will be available. Booking is recommended. To attend this event, please RSVP to fiveleaves.bookshopevents@gmail.com

European Literature Night Edinburgh presents the best and brightest of a new generation of avant-garde and literary poets from over a dozen countries across Europe. An extravaganza celebration of European poetry, culminating in a specially commissioned collective performance, #Europoem. This is a free event but please book a ticket.

A new title from Other Room reader Colin Herd, out now on Knives Forks and Spoons.

Join us for an evening of poetry at The Sutton Gallery on Monday 30th September from 7pm. There will be wine and other refreshments available and there will also be a last minute chance to look at works by Peter Standen and Yoshishige Furukawa in the gallery. And it’s all absolutely free.

MacGillivray is a Scottish writer and artist. As a musician she has supported The Fall, Arthur Brown and Arlo Guthrie, performed internationally as well as being featured on BBC Radio 3 Late Junction and The Verb. Her third album Horse Sweat Chandelier is released October 2013. MacGillivray’s poetry has been published in ASLS New Scottish Writing and Magma; her art criticism in Performance Research and several editions of Art Monthly. She has performed alongside writers such as Alan Moore, Don Paterson, Brian Catling and Iain Sinclair. Her first collection, Last Wolf of Scotland will be published in October 2013 and treads a fine line between surreal reality and imaginative abstraction, in order to trace the violence through which national mythologies are forged and perpetuated, from the wilderness of the Scottish Highlands to the piratical showmanship of the wild west. http://www.kirstennorrie.com/

Andrew Spragg is a poet and critic. He was born in London and lives there currently. His books include The Fleetingest (Red Ceiling Press, 2011), Notes for Fatty Cakes (Anything Anymore Anywhere, 2011), cut out (Dept Press, 2012), To Blart & Kid (Like This Press, 2013) and A Treatise on Disaster (Contraband Books, 2013). His writing was also included in Dear World & Everyone In It: New Poetry in the UK (Bloodaxe, 2013). http://www.archiveofthenow.org/authors/?i=138

“It’s difficult to say exactly what’s going on in Scottish poetry right now,” writes Sandra Alland. “But it’s definitely something exciting.” Alland convenes nine poets in Scotland, most of whom live in Glasgow or Edinburgh, to suggest a “recent surge” in work being done in flourishing hybrid forms and experimentation in this increasingly independent region.” 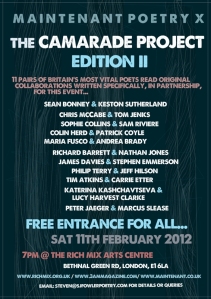 Listen to Colin Herd deny that he is American and much else of interest in this interview for the Scottish Poetry Library.

SJ Fowler’s project in which contemporary poets read work that has inspired them, now has a new dedicated site where you can watch all the films so far. As a taster, here is Colin Herd covering Maggie O’Sullivan, recorded at the last Other Room. Film of Colin’s reading, together with films of the other two readers, Jennifer Cooke and SJ Fowler, will be published soon.

Colin Herd will read at the next Other Room on Wednesday 26th October at The Old Abbey Inn on Manchester Science Park. For a flavour of his work, watch his reading at the Maintenant Slovakia event in London or read selections of his work in Blart and Streetcake. Or check out his images from the recent I AM NOT A POET festival in Edinburgh. Or his interviews with Steven Fowler and Kevin Killian.

The other readers are Jennifer Cooke and SJ Fowler.

For your diary our next scheduled events are as follows:

“my default “recognition” affect is switching to mawkish sorrow…”